Dating in general can be nerve-wracking, time-consuming and just plain old complicated. And if you’re busy with work or school, you’ve probably whined to a friend at some point about how difficult it is to meet people. That’s why the future of dating has moved mobile, and lucky for those looking, there are more apps than ever before!

But with the sheer volume of dating apps on the market—and each with their own twist—how can you possibly choose? We’ve rounded up a guide to help you figure out which to download based on your unique dating needs!

Are you looking for something a little more serious? Try Coffee Meets Bagel! 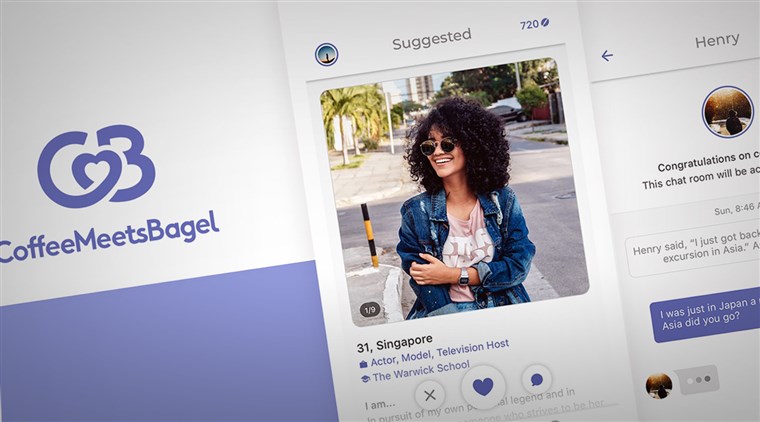 According to their website, the goal of Coffee Meets Bagel is to “…create meaningful connections that spark hearts and inspire people to share themselves authentically and enthusiastically,” and the app does just that. By limiting the number of your daily matches, Coffee Meets Bagel encourages users to consider their matches more carefully (this means you can’t just match with every profile you see, you have to save your matches for your favorites). Along with the basic bio, location and job, a feature unique to Coffee Meets Bagel is that it prompts you with three phrases to complete that can help you get to know other users a little better before giving them one of your limited matches: “I am…” “I like….” and “I appreciate when my date…” Lastly, the creators of this app know how scary app-dating can be, so you are only able to view a user’s name if you have a mutual Facebook friend.

Are you a woman looking to date other women? Try Her! 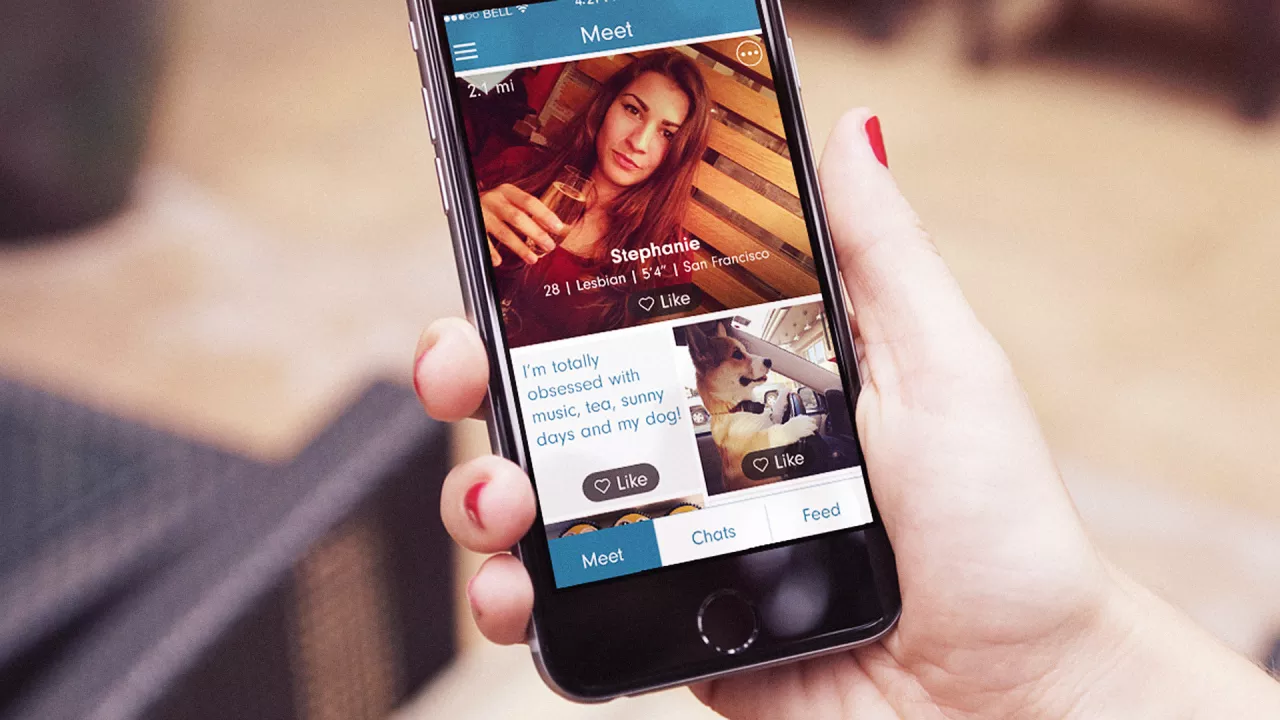 While gender search preferences on all apps we’re mentioning are LGBTQ+ friendly, Her is a dating app that was created for queer women by queer women. ‘Meet’ is the primary section of the app where you can swipe on profiles that meet your age and distance preferences. Once you match with another user, you can start a direct conversation. The ‘feed’ section allows you to comment and respond to pictures and text without needing to be matched with the user, so you can make your mark early on. Also, unlike most other apps, Her strives to be very community-centric and even has a section dedicated to promoting public events like music festivals and comedy nights, so users can socialize with members of the app in person instead of digitally.

Are you looking for a big dating pool? Try Tinder! 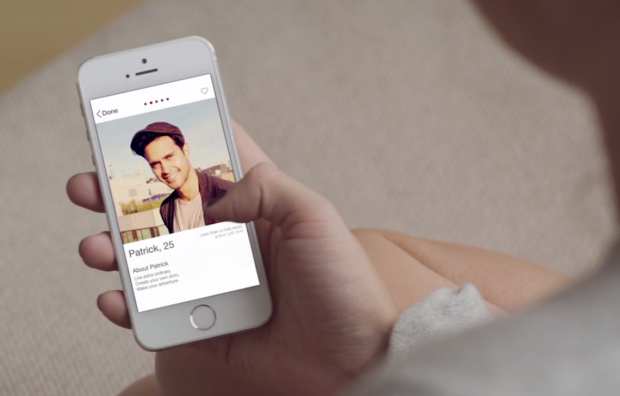 Image via Her Campus

Oh, Tinder. Would this be a list of dating apps if we didn’t include the one that started it all? While Tinder may be known for some less than savory features like bot accounts and spam messages, there’s a reason that it’s the most well-known dating app. To start off, the easy swipe right/swipe left format makes it simple to breeze by profiles you instantly know you aren’t interested in. This app is straightforward and allows users to share their age, 10 photos, a favorite song and a short bio. Tinder even maxes out the number of words allowed on your profile at just 500 characters, keeping the mystery alive in the often over-detailed world of app dating. Plus, perhaps the biggest pro of Tinder is that since it is so popular, there are TONS of users, making your potential dating pool as big as possible.

Are you tired of traditional dating conventions? Try Bumble! 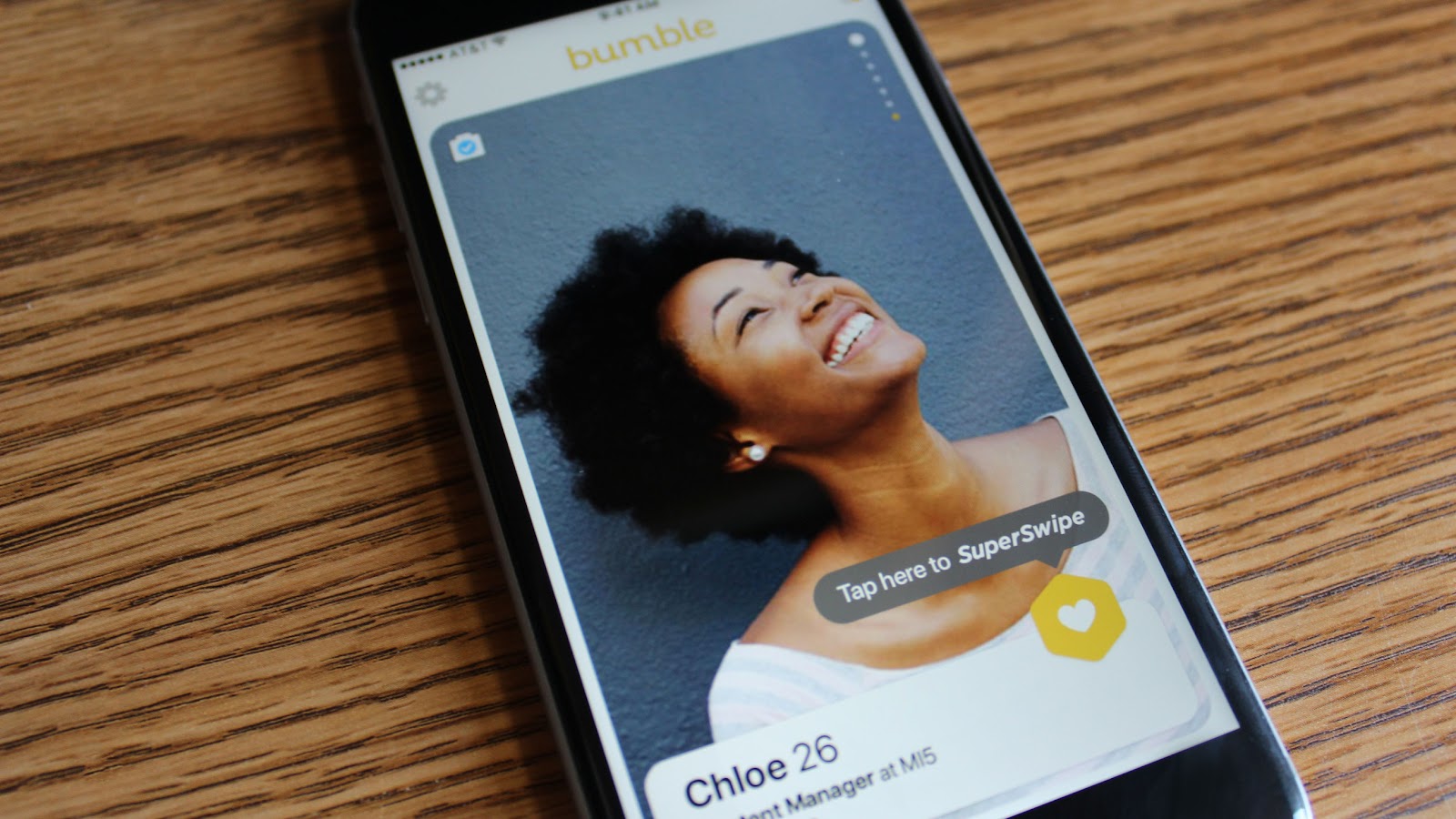 What’s the BUZZ about Bumble? Similar to apps like Tinder, Bumble utilizes the easy-to-navigate swipe left/swipe right format, but with one important difference: If a woman and man match with each other, the woman has to message first. The app was actually created by one of the Tinder co-founders due to overwhelming complaints about creepy, way-too-straightforward messages from men to women. Although this app was initially made with the intent to shut down hetero-normative dating conventions, it is open to individuals of all sexuality, so for same-gender matches, either user is able to message first.

Are you a hopeless romantic? Try Happn! 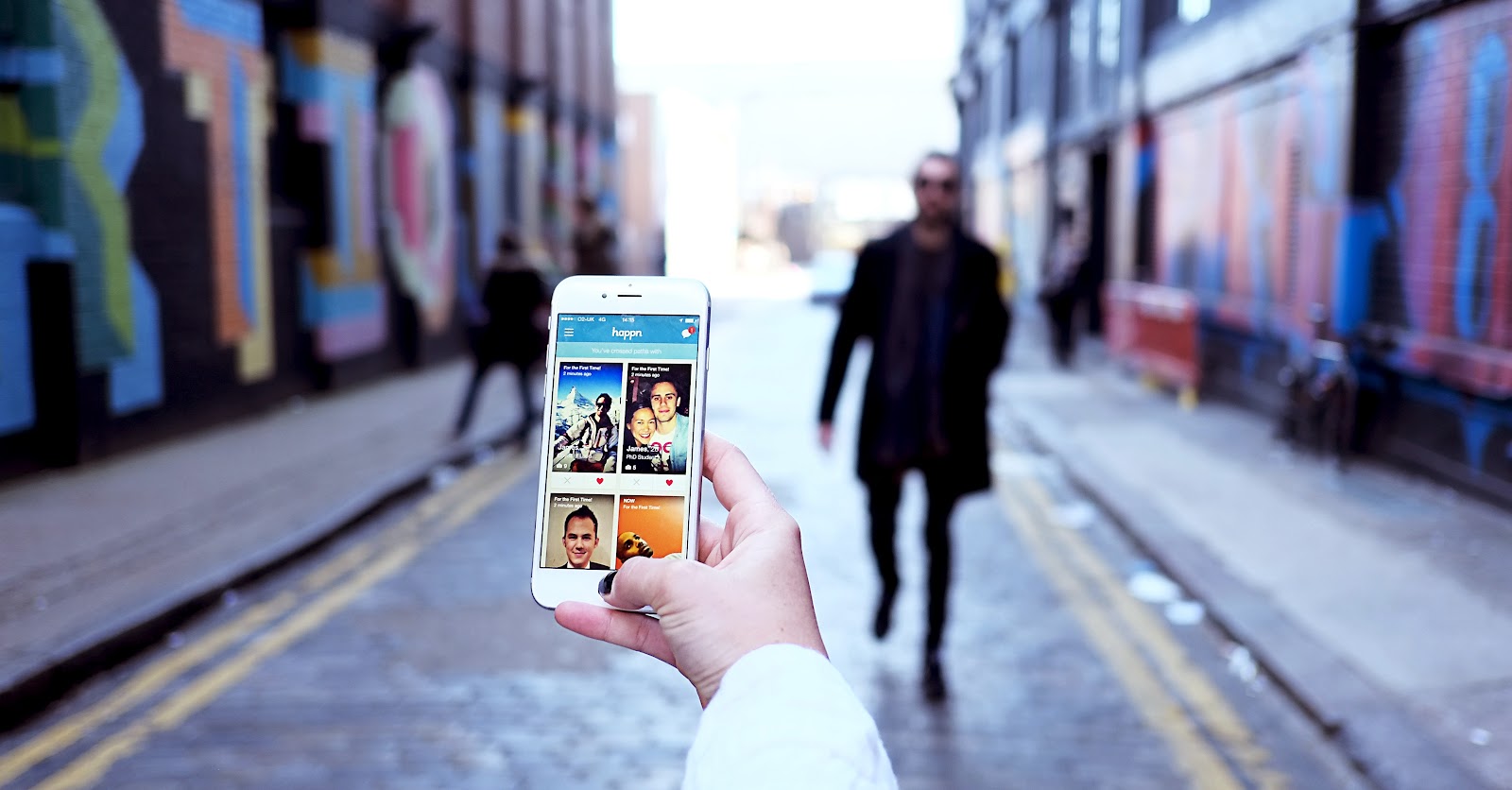 Image via I Live In Dallas

The idea of giving up your movie-worthy meet-cute and moving to mobile is reason enough for many potential users to want to stay away from dating apps. Happn attempts to mirror the serendipity of a real-life meeting by showing users individuals who they have physically crossed paths with during the day. This format brings back a level of reality to mobile dating, and allows users to meet some missed connections who might frequent the same spots as them. Happn is well aware that finding users based on geo-location can be a little, well, creepy, and definitely places safety at the forefront. It will never let users know how far another user is from them, just that they crossed paths at some point during the day.

Are you a dating app hater? Try Hinge! 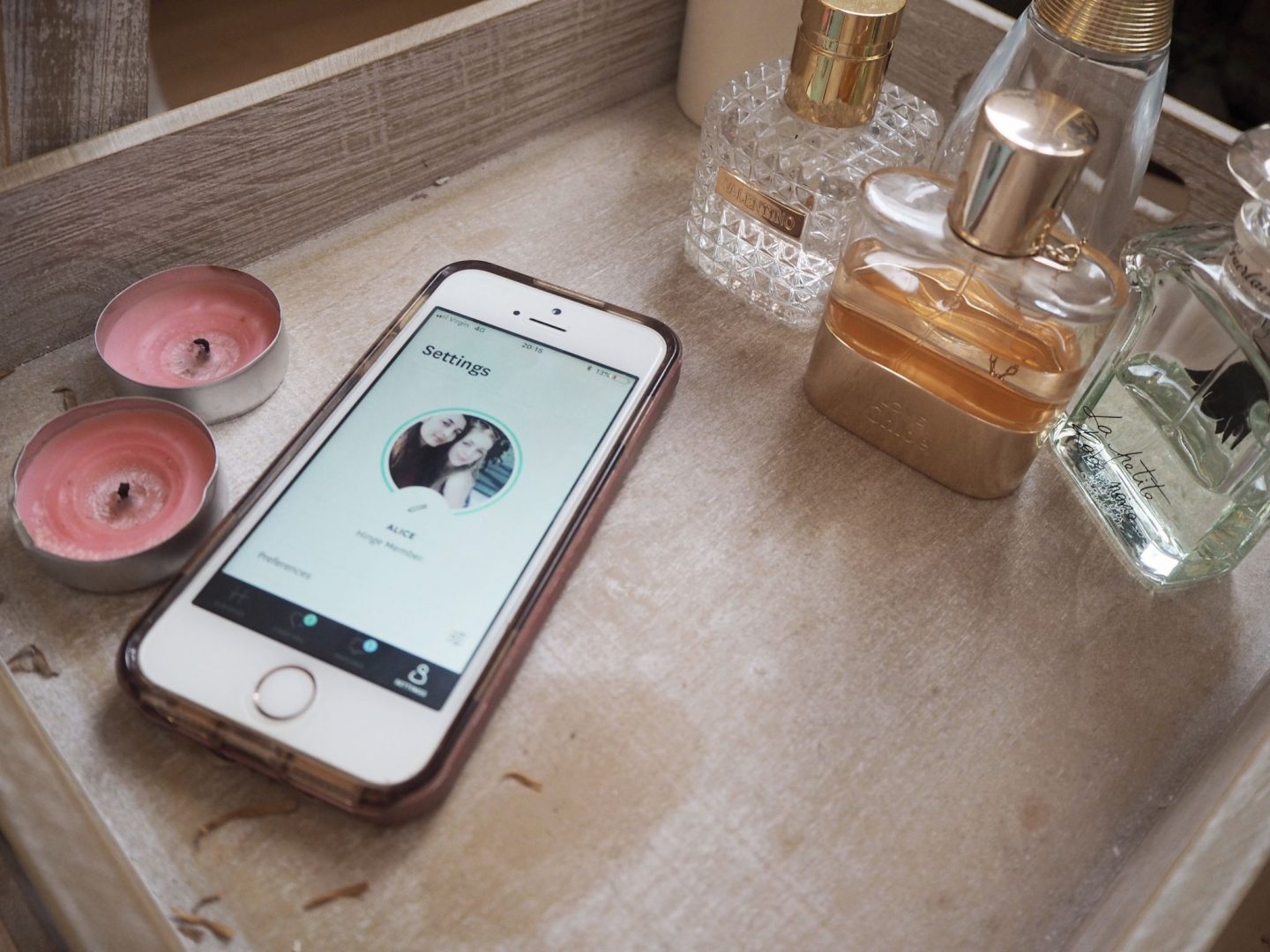 Image via Alice In Wonderlust

If you’re someone who wants to move past the mindless swiping and undeniably superficial culture of most dating apps, consider trying out Hinge. This app allows users to elaborate in-depth on everything from political views, religious beliefs, partying habits and more so that they can weed out candidates who don’t match up to their personal values and general lifestyle. Unlike other apps that give you seemingly random matches based on nothing more than who you’re geographically closest to, Hinge learns your preferences and even shows you users you are allegedly “most compatible” with. And if you’re sick of wasting time playing pen pal with users just to get “ghosted,” Hinge makes an effort to reduce “ghosting” by reminding users that it’s their turn to respond if it’s been a while since the last message.